Enter your City name or Pincode

Jwalamukhi Temple is a famous temple situated 3 km south of Kangra valley in the town of Jwalamukhi in Himachal Pradesh. The temple is dedicated to Jwalamukhi, which means the Goddess of light. It is also known as the Flaming Godess or ‘She of the Flaming Mouth. The anazing thing about this temple is that there is no idol to worship here. Instead the flame is worshipped as a manifestation of the goddess Jwalamukhi. It is believed that Goddess is residing in the temple in the form of flames. There is a copper pipe in the temple and natural gas comes out through this pipe. The priest of the temple lights this. 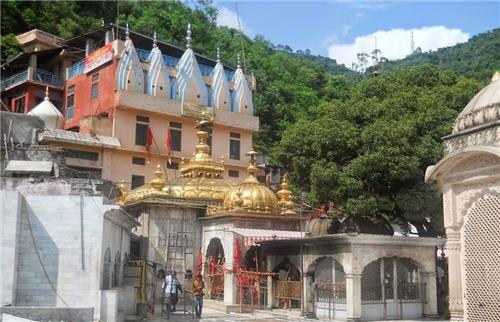 It is believed that the temple belongs to the golden period when the gods roamed the earth. In the time, when the demons lorded over Himalaya Mountains and harassed the gods, Lord Vishnu and gods decided to destroy them. A huge flame rose from the ground, when they focused their strengths. A young lady took birth from the fire, known as Sati or Parvati. Sati, who grew up in the house of Prajapati Daksha, later became the consort of Lord Shiva. But she killed herself, when her father insulted her husband. Lord Shiva as unable to accept this and he began stalking the three worlds with her body. Lord Vishnu with sudarsana chakra severed the body into pieces. Fifty-one sacred ‘shaktipeeths’ came into being at the places where the body pieces fell. It was at Jwalaji where Sati’s tongue fell and the goddess is manifest as tiny flames, which burns flameless blue through cracks in the age-old rock.

There is also another legend associated with the temple. Raja Bhumi Chand Katoch of Kangra, a great devotee of Goddess Durga, had a dream of the sacred place and sent people to trace the location Rajas, after discovering the site, erected the temple there. It is also believed that Pandavas contributed in the erection of Jwalamukhi temple. 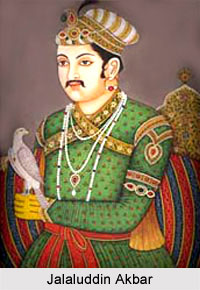 Akbar, during his ruling period, learned about the legends of Jwalamukhi. He visited and tried to douse the flames with a stream of water. But he failed in his attempt, as the flames kept burning. Akbar realized the power of the Goddess and gifted a Gold Umbrella to the Goddess. But on offering, the umbrella turned into an unknown metal, which means that the Goddess didn’t accept his offering. Akbar, with utmost humility, became a devotee of the Goddess.

The princely state of Nadaun was responsible for guiding and supervising the temple affairs during old times. Raja himself deputed particular priests for daily rituals. After Independence and the break-up of the feudal system, the state government took the administration of Jwalamukhi temple. Temple officer, who is a government official, ensures that the rituals are performed by the 102 pujaris on a daily rotation basis. The pujari on duty gets the 40% of the collection of that particular day. Government spent the remaining 60% to improve and develop the facilities for pilgrims and the poor.

Jwalamukhi temple positioned besides a cliff, is built on a wooden platform with the Indo-Sikh style of architecture. It has a simple structural design. But what makes it undoubtedly divine is the religious aura. The temple has dome and spire covered with gold. There is also a folding door beautifully made of silver plates. The main door of the shrine is plated with silver. You can see huge brass bell in front of the main shrine, when you enter a small platform attached at the front before the large mandap. This bell was presented by the King of Nepal.

The temple has nine different ceaseless flames named after goddess such as Unpurna, Mahkali, Chandi, Bindhya basin, Hinglai, Saraswati, Maha Lakshmi, Anji Devi and Ambika. All these flames are continuously burning without the support of any fuel. These flames are coming out from the cracks in the ancient rock. You can see a pit inside the shrine where many flames are burning. Priest makes the offerings to the goddess in this same pit. There are many small shrines like Gorakh Dibi and Chaturbhuj Temple in the temple complex. Jwalamukhi Temple is one of the 51 Shakti-pitha temples. There is a mystic Yantar or diagram of the goddess here and it is covered with ornaments and shawls. The temple also has a musical fountain nearby. 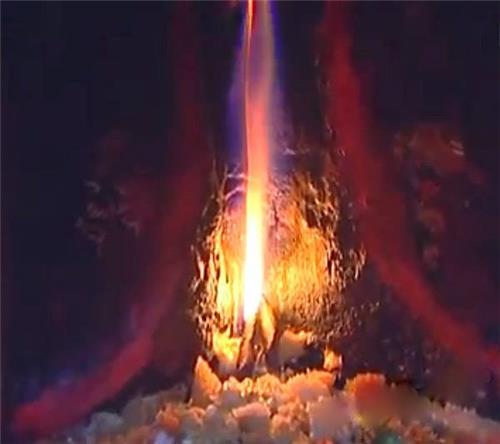 Jwalamukhi Flaming
There is puja of different phases and it goes on practically the whole day. Five times Arthi and one havan is performed daily. Portions of “Durga Saptasati” are also recited. Bhog of Rabri or thickened milk, Misri or candy, milk and seasonal fruits are offered to the deity. People in large number come to Jwalamukhi temple from various corners of the country. Colorful fairs are held during the time of Navaratri in March-April and September-October. Temple is crowded by countless number of devotees during this season.

We can visit Jwalamukhi temple throughout the year. However, the months of September and October are the best time, as colourful celebrations are held during Navratri celebration.Various types of folk dances, plays, songs, wrestling matches and athletics are held as a part of the fair and many tourists from various corners of the country visit Jwalamukhi temple to enjoy this.


How to Reach Jwalamukhi temple ?

Gaggal Airport, located at 46 km away from Jwalamukhi town is the nearest airport to the temple. Indian Airlines conduct three flight services a week from Delhi to Daramshala. There is a narrow gauge railhead at Ranital, which is 20 km away from. Trains from Pathankot to Joginder Nagar reach Jwalamukhi road in three hours and buses are available to Jwalamukhi from there. The Chandigarh airport and railway station are situated 200 km away from the town. The Jwalamukhi temple is also well linked by roadway. You get bus services of State transport from cities of Punjab and Haryana to Jwalamukhi. Buses from Palampur, Joginder Nagar, Manali, Simla and Mandi are available to Jwalamukhi. You can also hire taxis to get the temple.

There are about five aartis conducted in jwalamukhi temple every day. The first aarti at 5 am is known as the Mangal aarti. The next, known as Panjupchaar Pujan, is done at the time of sunrise. Another aarti is performed at around midnoon and it is named as Bhog Ki aarti. The evening aarti, which is simply called aarti, is done at around 7 pm. Shaiya ki aarti, done at around 10 pm is the last one. It is very unique, as such aarti is performed only in Jwalamukhi temple. During this time, the bed of Maa Jwala Goddess is adorned with jewellery and dresses. This aarti is performed in two parts, first one is in the main temple and the second one is in the sejabhavan. Slokas from Soundarya Lahri of Sri Shankaracharya are recited throughout the aarti. The rituals also include havan once a day when parts of Durga Saptarshi are recited. Bhog of rabri or thickened milk, misri or candy, seasonal fruits and milk are offered to the goddess. The Prasad that is offered usually are pan, supari, narela, loung, dhawaza and elaichi.

Even though there are no accommodation facilities in the temple complex, you can see many budget and mid-range lodging options in Kangra. Eateries or restaurants are also very few near Jwalamukhi temple. So, you are better to carry food packets and water during your visit. However, you get various delicious cuisines in Kangra and Chintpuri. We can visit the temple throughout the year, as it is open every day from 06:00 am to 05:00 pm. However, the best time to visit here is September and October, as colorful fairs are held during this period.